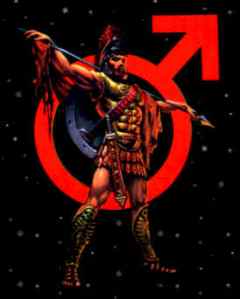 Mars.. the Name of the Roman God of War and Masculinity… Aries the Greek name, same god

Mars is at HOME in Aries…  If there is a contest or a fight MARS is there!

The Aries Mars is not afraid of violence, but will also be quite angered if one throws the first blow against them.   Unless otherwise modified by more cooling aspects, It is never a good idea to upset an Aries Mars ( which can be very very easy to do) . Don’t expect the Aries Mars to give up anything without a fight

Loretta Lynn -You Ain’t Woman Enough to Take My Man

Any sort of Athletics is VERY Aries Mars

Of course, add all this together and you get :

And on that (ahem) note…. This is ,essentially, #Mars in #Aires